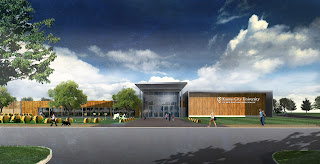 The Community Foundation of Southwest Missouri announced a half million-dollar grant from the Joplin Recovery Fund, Joplin Tomorrow announced a $750,000 donation, and Missouri Southern Foundation announced its donation of $250,000.

The University expansion will help address the growing shortage of primary care physicians in the surrounding rural and underserved areas. The Joplin campus, which is scheduled to open in 2017, will be the first new medical school in the state in nearly 50 years. Learn more about plans for the KCU medical school in Joplin.
Email ThisBlogThis!Share to TwitterShare to FacebookShare to Pinterest
Newer Post Older Post Home