KCU held a ribbon-cutting Jan. 12 to inaugurate its newly renovated Administration Building. The ceremony, which also served as the kickoff event for KCU's 2016 Centennial celebration, was attended by KCU students, faculty, staff and alumni, as well as key civic leaders, elected officials and members of the Kansas City community. 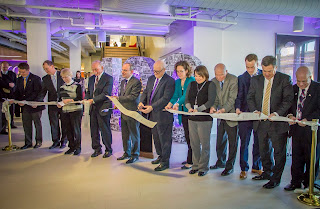 Originally home to the first Children's Mercy Hospital, The Administration Building has a rich history with the University. The 100-year-old facility was purchased in 1971 by the KCU Alumni Association and was gifted to KCU in 1975; it became the University's permanent address in 1979. Today, the building houses more than 70 members of KCU faculty and staff.

View photos from the event and learn more about the Administration Building and other events planned to commemorate KCU's
100th anniversary.
Email ThisBlogThis!Share to TwitterShare to FacebookShare to Pinterest
Newer Post Older Post Home