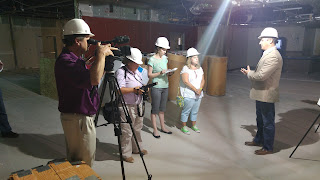 Construction on KCU's new campus in Joplin, Missouri, is well underway and on schedule. Local media and community fundraisers were invited to "Hard Hat" tours July 20th, where they were shown highlights of interior and exterior work being performed to transform the former hospital building into KCU's new medical school. The new building is designed to address student learning in the 21st century, with key areas promoting active learning experiences. These include the anatomy lab, the osteopathic manipulative medicine lab and an ambulance bay, where students will learn how to handle mass trauma.

Occupancy is slated for May of 2017, with the first cohort of 150 students arriving in July 2017. The University has been able to source $20 million of the subcontracted construction work to companies located in southwest Missouri, with nearly half of that contract value remaining in Joplin. Once fully enrolled, KCU-Joplin is expected to have an economic impact of more than $100 million to the local economy.