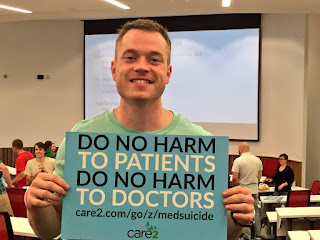 Studies indicate that physicians have one of the highest suicide rates of any profession, due in part to extreme stress and burnout. And, it's no secret that medical students face similar challenges themselves, often dealing with depression and anxiety. Indeed, the national rate of medical school students who report experiencing these problems stands at 54 percent. Yet, physicians and medical students are typically among the last people to ask for help when it's needed.

In order to shed light on these important topics, on August 21, students at KCU organized a "Day of Solidarity" through Care2 network, part of a national campaign to prevent physician suicide. Attended by students, medical professionals, faculty and staff, the forum openly discussed physician and student/resident suicide and urged that action be taken on the parts of academic governing bodies. Ten other cities hosted similar talks.

Although there have been no suicides at KCU, the University maintains a proactive stance in protecting the mental health and well-being of its students. A psychologist is on staff, and the administration is organizing a dedicated team — including a psychologist and other students — to check on students for signs of struggling. The team also will conduct quarterly student surveys to identify anyone who should be offered individual help.